RGT are proud to announce that the WKG team have decided to create their Vive La France competition on our platform.
WKG have created a fantastic event that will test riders abilities and really push everyone to their limits.

21 stages! and 3 competitions that allow riders to focus on the types of courses they prefer and enjoy the event any way they want.
The courses are being run using RGT Cycling’s magic road feature, this means every stage will be created using GPX’s from the actual roads on various classic stages and iconic climbs. This makes the event truly unique in allowing riders to have the ability to race on some of the most iconic roads in France from the comfort of their own home. 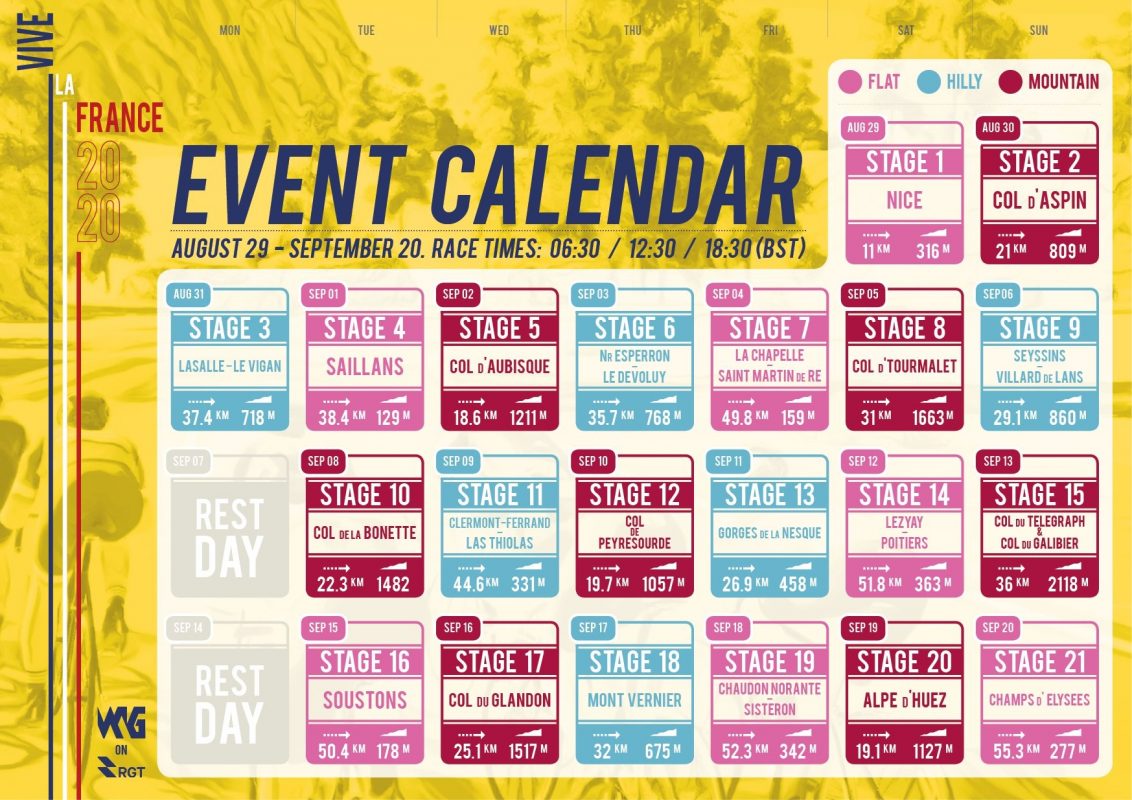 This is a sprint competition based on 8x flat stages, this is for the big powerhouses to show their strength and tactical abilities as they will need to save enough energy for the final sprint on each stage.
The Flat competition starts the whole event off with Stage one being a short 11km Time Trial, there is 316m of climbing which will give some pause for thought but will test the strength of everyone.
This competition culminates in Stage 21 on the Champs Elysee. This final stage will not be treated as a neutral stage: everything is up for grabs!

The competition will be points based per stage

One for the lightweights and some truly epic climbs for those that prefer to go up.

We start with the Col d’Aspin which is a relatively easy start to the competition but soon ramps up with the Col d’Aubisque and the mighty Tourmalet rounds off the first week.
The second week will test event the strongest starting with the Col de la Bonnette and the short but steep Col du Peyresourde. But the second week is all about Stage 15! Without doubt, this is the Queen of the competition and will make even the best climbers nervous. Col du Telegraph followed by the Col du Galibier, this stage has 2118m of climbing which will test everyone who rides it. There is no hiding. This stage will have a big effect on both the climbers competition but also the General competition which is as it should be; these climbs have seen so many Tour dreams made or broken over the many years they have been included in the Tour, this event will be no different.

The competition will be points based per stage result.

This is the big one, this is time based, your time from each stage is added up and the person with the fastest overall time wins. This will be incredibly hard over 21 stages including those listed above, those that go for this competition will have to race tactically to ensure they finish strong on the stages where they will make the most time over their rivals, without teams sheltering riders like in the real world this will be down to strength, recovery, endurance and tactical ability. Truly one to watch.

The event starts on the 29th of August (28th for US timezones) and lasts until the final stage on the 20th of September.
There are 4 race timeslots per stage, 00:30, 06:30, 12:30 and 18:30 (BST).
All 4 races per stage will have their race times amalgamated into one unified set of Stage results, from that points will be issued to either the Flat or Mountain competitions as required.

Everyone’s stage times will go toward the overall General competition which is based on accrued time over the 21 stages.

There is also a realization that not everyone can race every stage within their chosen competition so WKG have created a formula that will assign a finish time and related points based on your normal performances should you miss any stages, this will mean people that have no choice but to miss the odd stage can still continue in the competition without major time loss.
ZMS will be streaming at least one of the daily stage races with Multiview to really capture the racing throughout the field, live commentary will also be a part of it which to really show off these events.

One thought on “WKG and Vive La France”